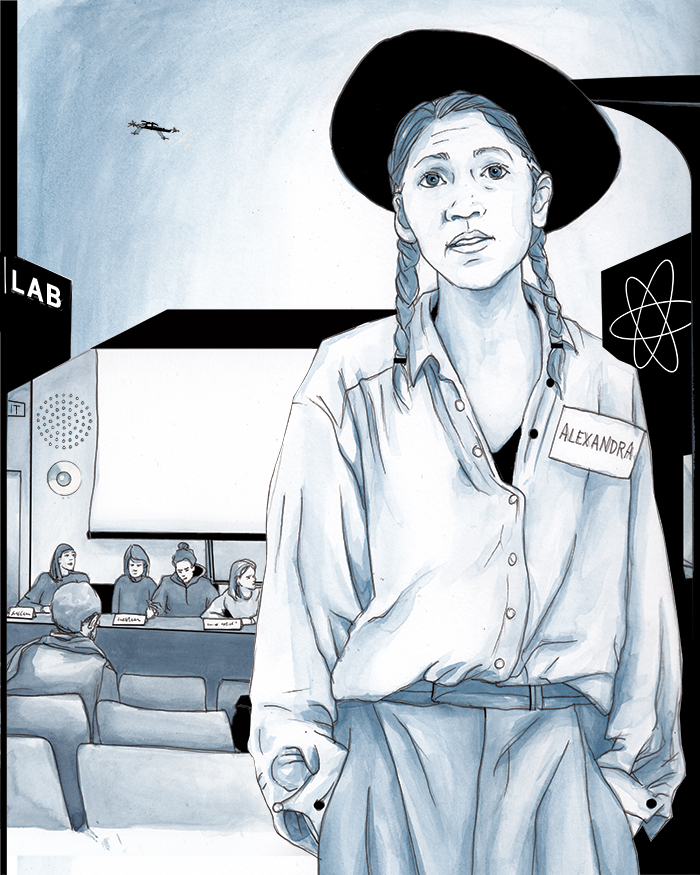 RADIFY begins in 2049, just as medical tourism and overseas practices of unregulated breakthrough human gene-editing procedures have ignited global protests and prompted a multi-national human biotech and gene-editing policy summit. At the assembly, American xenophobic biogenetics mogul Eric Bateson inaugurates an influence campaign to deregulate reproductive research and technologies for the purpose of building an elite master race.  Unbeknownst to the public, he has been financing discriminatory medical design and begun illegal human trials with a profiteering scientist.

Outside the conference halls, large protests explode on the streets.  Journalist Thomas “Target” James III is at the scene for news-blog “RADIFY.”   When he suspiciously dies in the crowd, three unlikely heroes – Cadence Morrow, Alexandra Puma, and Roam Sparks – unite to search for the truth behind his death.

Target’s girlfriend Cadence is the central character in RADIFY. Devastated by his passing, she soon discovers cracks in the police report, and wants facts.  In her private life, suddenly without Target’s support, Cadence faces renewed pressure from family and doctors to intensify “management” and move forward with nonessential new “geno-thera-surgery” for her intersex variation.  She resists and begins to explore her sexuality, rethinks her concept of gender, and eventually finds community among intersex rights and LGBTQI2GNC+ activists. Along the way she struggles to trust two new acquaintances, Alexandra and Roam, who reach out to help her investigate.

Alexandra, Indigenous, Latina/x, queer, and a graphic novelist who, against the odds, gathers information from a racist colleague to help uncover Target’s killer.  Roam is Target’s last collaborator and a Bioethics / Medical Sociology PHD candidate with expertise in current human biotech trials, breakthroughs, and policy.  Roam and his wife Sarah have reluctantly employed a fertility clinic and face pressure to choose trending “golden” traits for their child. The novel centers around the challenges all three face while dodging threats and uncovering a dark plot against human genetic diversity. By story’s end they make international headlines.

“I have never been more dedicated to a project than I am to this one!  That’s why I structured RADIFY to be the first in a series of speculative-fiction graphic novel mysteries set in the near future when breakthroughs in biotechnology and re-imagining healthcare have captured the public’s attention.” – Emily Mode

What is “intersex” and why did I choose to write an intersex character?

Intersex is a general term used for people born with any of a range of characteristics that may not fit traditional conceptions of male or female bodies, including variations in their chromosomes, genitals, and/or internal organs. People with intersex traits have always existed.

I became interested in intersex stories because of my overlapping experiences with some people in the intersex community and my desire to help re-shape healthcare.  As a lesbian of Jewish decent who has undergone treatment for epilepsy I have had periods in my life where I felt safer if I hid parts of my identity, have experienced gender expression discrimination and homophobia, and was raised with family stories of medically sanctioned eugenic genocide. When I developed epilepsy in my late 20s, I was working but had no health insurance and necessarily signed up for Emergency Medicaid. The following years of excessive treatment/experiments by doctors who could or would not discuss my medical options, pharmaceutical side-effects, and did not take my complaints seriously (until I ended up in the hospital) had lasting consequences.  I finally found a generous, respectful and supportive Neurologist who I appreciate to no end. But the trauma of those first four years lead me to question medical training practices and biases within the Medical Industrial Complex – across “diagnosis.”

Over seven years ago I started looking at intersex experiences. Within a few years I grew committed to specific groups of intersex self-advocates and now work with intersex consultants who provide sensitivity readings of RADIFY, and help me refine Cadence’s story arc and medical timeline.  The character of Cadence is being face modeled by an intersex cinematographer and intersex activist.  In addition I have intersex individuals and an organization of intersex youth that I plan to collaborate with on the appendix and questions for the back of the book.

“As in intersex person and an activist I am thrilled to be the face model for Cadence, an intersex character. Representation is very important for our intersex community and I’m so grateful to Emily for working with us and for doing it right! I feel very lucky to be a part of this project and I can’t wait for the final result!” – Irene Kuzemko

“I’m excited for Radify because it explores many of the themes we intersex and LGBTQ+ people will have to deal with in the not-so-distant future. It’s deeply refreshing to see an intersex character taking back power in the face of industrial medicine.” – Hans Lindahl

“Our youth members have been hard at work consulting on this graphic novel project: one of the first featuring an intersex character! They did sensitivity reading, face modeling, and background research. The author, Emily Mode, has been dedicated to listening to and compensating intersex youth from the beginning. Stellar!” – InterACT Advocates for Intersex Youth

Learn More
© RADIFY A Graphic Novel 2020. All Rights Reserved
Back To Top